All new Li-Fi, The future of Wireless network is here!

In today’s world we all are connected to technology with the help of Wireless networks or as we call it as Wi-Fi and there will not be a person who doesn’t know the term “Wi-Fi”. As technology change its colors like chameleon. You must have heard a term called as “Li-Fi”. It is a technology which uses light to transmit the data. So what is the difference between Wi-Fi and Li-Fi? Let’s see what are Pros and Cons of Wi-Fi and Li-Fi.

What is Wi-Fi and how does it works?

Wi-Fi is a short term for “Wireless Fidelity” which uses Wireless local area networks (WLAN). All of the Wi-Fi technology is based on IEEE 802.11 standards. IEEE 802.11 is a set of MAC (media access control) and PHY (Physical Layer) specifications for implementations of wireless networks. These specifications are maintained by Institute of Electrical and Electronics Engineers (IEEE). Wi-Fi works on the wireless access point such as hotspot and has a range of about 25 meters, although it may vary depending on range of router or hotspot. Wi-Fi generally uses radio waves of 2.4 GHz and 5 GHz.

In 1971, a small computer networking system in Hawaii used the ultra high frequency to connect the Hawaiian island. Initially they were using it on basis of Ethernet and later they bounded it to IEEE 802.11 protocols. In 1991 NCR Corporation, an American Computer hardware company invented the first wireless network.

The pros and cons of Wi-Fi:

Improved data communications lead to faster transfer of information within businesses and between partners and customers. For example, sales people can remotely check stock levels and prices whilst on sales calls.

Because wireless technology enables the user to communicate while on the move, you are rarely out of touch – you don’t need extra cables or adaptors to access office networks.

Office-based wireless workers can be networked without sitting at dedicated computers, and can continue to do productive work while away from the office. This can lead to new styles of working, such as home working or direct access to corporate data while on customer sites. See our guide on employees working from home.

Wireless networks can be easier and cheaper to install, especially in listed buildings or where the landlord will not permit the installation of cables.

Wireless networking could allow you to offer new products or services. For example, many airport departure lounges, train stations, hotels, cafes and restaurants have installed ‘hot spot’ wireless networking services to allow mobile users to connect their equipment to their ‘home’ offices while travelling.

There are also certain drawbacks associated with the use of wireless networks.

Wireless transmission is more vulnerable to attack by unauthorised users, so particular attention has to be paid to security. See our guide on securing your wireless systems.

You may suffer interference if others in the same building also use wireless technology or where other sources of radio signals are present. This could lead to poor communication or, in extreme cases, loss of wireless communication altogether.

In some buildings getting consistent coverage can be difficult, leading to ‘black spots’ where no signal is available. For example, in structures built using steel reinforcing materials, you may find it difficult to pick up the radio frequencies used.

Wireless transmission can be slower and less efficient than ‘wired’ networks. In larger wireless networks the ‘backbone’ network will usually be wired rather than wireless.

The term Li-Fi was coined by pure LiFi’s CSO, Professor Harald Haas, and refers to light based communications technology that delivers a high-speed, bidirectional networked, mobile communications in a similar manner as Wi-Fi. Although Li-Fi can be used to off-load data from existing Wi-Fi networks, implementations may be used to provide capacity for the greater downlink demand such that existing wireless or wired network infrastructure may be used in a complementary fashion.

How does LiFi Work?

LiFi is high speed bidirectional networked and mobile communication of data using light. It comprises of multiple light bulbs that form a wireless network.When an electrical current is applied to a LED light bulb a stream of light (photons) is emitted from the bulb. LED bulbs are semiconductor devices, which means that the brightness of the light flowing through them can be changed at extremely high speeds. This allows us to send a signal by modulating the light at different rates. The signal can then be received by a detector which interprets the changes in light intensity (the signal) as data.The intensity modulation cannot be seen by the human eye, and thus communication is just as seamless as other radio systems, allowing the users to be connected where there is LiFi enabled light. Using this technique, data can be transmitted from a LED light bulb at high speeds. 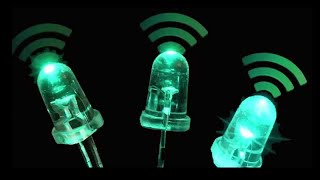 How much does LiFi cost?

pureLiFi is currently working towards miniaturisation of LiFi technology. Ultimately the end goal is to have LiFi in every mobile device. This means that the technology will be affordable for integration into handsets, tablets and laptops. Ultimately the end consumer will see minimal or no cost associated with LiFi as the goal is to have LiFi embedded in every wireless mobile device. Today companies can speak to pure LiFi about working with us on proof of concept projects and other types of installations. These installations are priced based on individual requirements.

How is LiFi more secure than other wireless technologies?

LiFi is developing the security components and technologies that enable security specialists to deliver more secure wireless communications. It is significantly more secure than other wireless technologies because light can be contained in a physical space. Our doors and windows can be shut, and physical barriers and adjustments can be implemented to contain and protect the light. We can create the conditions that allow us to shut the door on our wireless data. It should be understood that the existing security protocols for encryption and authentication can be leveraged in LiFi systems to provide even more secure wireless systems.

The future of Li-Fi

In November 2014, Li-Fi pioneers pureLiFi joined forces with French lighting company Lucibel aiming to bring out Li-Fi enables products, by the end of 2015.

pureLiFi already have two products on the market: Li-Flame Ceiling Unit to connect to an LED light fixture and Li-Flame Desktop Unit which connects to a device via USB, both aiming to provide light and connectivity in one device and with faster connectivity and data transmission it’s an interesting space for businesses. The integration of internet of things devices and Li-Fi will provide a wealth of opportunities for retailers and other businesses alike. For example, shop owners could transmit data to multiple customers’ phones quickly, securely and remotely.

Li-Fi is reportedly being tested in Dubai, by UAE-based telecommunications provider, du and Zero1. Du claims to have successfully provided internet, audio and video streaming over a Li-Fi connection.

What’s more, reports suggest that Apple may build future iPhones with Li-Fi capabilities. A Twitter user found that within its iOS 9.1 code there were references to Li-Fi written as ‘LiFiCapability’ hinting that Apple may integrate Li-fi with iPhones in the future.

Beware: Pharma Marketing Cos under scrutiny of Quality by…

Why Kideney Processes Are Important For Urinary System